Throughout my life I have been through my fair share of storms — both literal and figurative ones. A week ago my little town with a population of less than 1500 was the bulls-eye for a severe line of thunderstorms whose 95 mph winds devastated the power grid leaving everyone without power, phone, internet or cell service for almost a week. The majority of services have now been repaired thanks to all of the amazing lineman and people who have worked tirelessly to assess, plan and carry out the difficult job of restoring power.

My son had just gotten off the bus, thunder rolling in the distance with a severe thunderstorm and tornado watch issued. It wasn’t long before daylight changed to an eerie dusk-like glow and everything around us grew silent except for a faint but ominous “whooshing” sound that signaled something deep inside me to get in the house and take cover. The wind slammed doors shut, the power went out and I instructed my son to go to the basement. Our dog, who typically loves to sit outside during thunderstorms, was panting and pacing. Living in upstate NY in the woods just a few miles from the Delaware River, I’ve never truly felt in danger of a tornado, but my instincts took over and we didn’t chance staying upstairs. We could see sheets of rain blowing sideways by the windows while hail started to bounce off the driveway.

It didn’t seem to last long and being in the basement we didn’t actually see or hear anything fall. However, once we ventured outside I quickly realized that what I first thought were just broken branches, were actually tops of trees that had completely uprooted and were now totally blocking our driveway. Only 4 trees fell in the driveway, while 29 others fell throughout our property. By the time  the storm had moved through our town over 50 houses had sustained damage, power, cell and phone service were wiped out, buses were sent back to school due to impassable roads and a state of emergency had been declared.

Anxiety replaced the relief I initially felt once it was over when I realized my husband had been driving in it on his way to pick up our oldest son. For an hour and a half I paced and prayed for their safety. The usual 10 minute drive home from the high school took them 90 minutes as they were constantly rerouted due to downed trees and power lines. Fortunately the storm spared my husband as he drove through it and the coaches kept the athletes inside in a safe hallway.

It is truly a miracle that no one was killed or seriously injured. The number and size of the trees that fell in such a short period of time blows my mind. One of our trees in particular — one we had just recently discussed getting cut down out of fear of it hitting the house in a storm — was snapped off halfway up the trunk knocking down several other trees with it. If the wind had blown in a slightly different direction it would have easily demolished our house. As we walked our road to help workers and neighbors clear the way we saw the same scenario. Houses and pools narrowly missed. Unfortunately this was not the case for everyone. However, people everywhere have been expressing their gratitude because each scenario could have been so much worse. 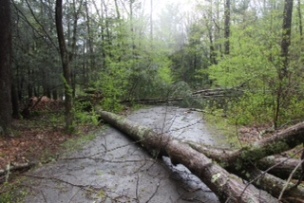 Despite the overwhelming amount of damage and clean up most people still face, they are coming together and supporting each other in countless ways. Restaurants on our tiny main street set up tents and offered free food, shelter and a place to hang out. The local grocery store donated a truck load of food, the Town Hall provided water, dry ice, charging stations and a place to go. Within an hour after the storm ended town crews were out everywhere with chainsaws clearing roads so parents could finally get to school to get their kids, while teenagers from nearby took to their four wheelers to drive around and see who needed help.

I’m in awe of the people who spent days doing back breaking work removing trees from houses and driveways so people could get around. Then to top it off, once power was restored in town it sparked a fire in a furniture store on main street destroying a piece of the town’s history and causing some people who lived in nearby apartments to lose everything. But what are people talking about? How lives were spared, how everyone has come together and how much they love and appreciate our town and everyone who has worked so tirelessly.

As I drove home the day after the storm from getting gas for the generator, the song “How He Loves” starting playing from my playlist and as I was hearing the singer belting out how much God loves us ( He is jealous for me…His love’s like a hurricane, I am the tree, bending beneath the weight of His wind and mercy…) I was struck by the irony of it due to the massive trees that were surrounding me, power lines strewn across the road, transformers dangling from snapped poles —  let’s just say the image did not match the feeling the song was portraying. At first I was annoyed and almost skipped to another song. How was this a sign of God’s love when it looked so destructive?

Well, the more I drove, the more destruction I saw, but then it truly hit me just how amazingly lucky we all were. There was evidence everywhere that the losses could have been so much worse. I realized what a miracle it was that no one was hurt or dead. Then I remembered posts I saw and conversations I heard where people were expressing things like, “Thank God you are safe.” and “Thank God it wasn’t a complete loss.” I wondered if people really were stopping to thank God or if it was just a saying they used and it made me take inventory of my own actions questioning if I had expressed gratitude to God for keeping us all safe.

But here is what’s made such an impact on me and been on my mind ever since the storm — God is so powerful. He could have used that storm to wipe us all out if He wanted to. Let’s face it…we’ve screwed up this world pretty badly. He could simply snap His fingers and our existence on this planet would be over. But He didn’t because He really does love us.  He has not given up on us. He wants us to wake up and pay attention, but we are so busy being wrapped up in ourselves, our phones and our material possessions that we don’t notice it. Maybe it had to take losing our phones and modern conveniences for us to take notice of our neighbors and work together.

It seems as if whenever a disaster occurs, immediately afterwards we see people coming together, putting differences aside and helping each other out. But does it ever really last? It’s only been a week and as the utility trucks start to have less of a presence in our area, the traffic lights once again do their job so we can mindlessly drive around and we get back to our normal routines that don’t involve relying on each other for water, wifi or laundry, I feel myself slipping back into  ‘life as usual’.

But that’s the whole problem! Becoming complacent is such an easy trap to fall into. The urgency I felt a few days ago — when I had no tv to fall asleep to and I was left with solely my thoughts swirling around in my head — prompted me to pray more and seek out God. Being at my house without a constant connection to the outside world via the internet actually made me feel more connected to the world, most importantly the world right around me where people needed help and were struggling.

Every time I go down my driveway now I am reminded of how lucky my family is that we didn’t sustain more damage or any injuries. I am reminded of just how quickly and easily our lives could end. I admit that I am extremely stubborn and it causes me unnecessary suffering. It takes me way too long to learn life lessons and I tend to take the hard road because of it. Or I tend to learn a lesson and for a time I will change, but then I get lazy and forget to be grateful and to trust God.

If you’re like me, perhaps you forget about God when it’s smooth sailing or maybe you run from Him because He’s asking you to step out of your comfort zone. Maybe you don’t respond to subtle hints and unfortunately need major wake up calls from time to time because you are stubborn like me. One thing is for sure — the impact from this storm will be evident for a long time; the million dollar question is will I use those reminders as opportunities to motivate myself to make changes and hold onto the lessons I’ve learned?

Will I remember the selflessness of my neighbors, thank God for them and try to be more like them? Or will I retreat to my house and remain absorbed in my own world?

Will I get pissed off and complain about everything that’s left to clean up, or will I be reminded of the safety God provided and then pray for those who weren’t as fortunate as I was?

Will I notice the goodness happening around me? Will everyone in my town walk around with a deeper sense of gratitude for each other and where we live, or will we grow complacent and take things for granted?

Only time will tell…

But for now, do yourself a favor and click here, close your eyes and listen to the song. When you envision the storms of your life can you see God in the midst of them? Can you see where He is trying desperately to get your attention? Are you grateful to Him for bringing you safely through? Have you had a wake up call recently and if so what are you doing about it? Don’t be complacent. He wants you awake for a reason and because He loves you more than anything He will do whatever it takes to draw you closer.

4 thoughts on “Surviving The Storm…”